Lessons from Jefferson, Kant, and the League of Ordinary Gentlemen.

“I have an aunt in Hamburg, but she is dead,” said Count Sagramoso in broken German.

“Why didn’t you have her skinned and stuffed?” replied the schoolmaster.

In our age of social media and soundbites, it’s not too hard to imagine this triggering a Twitter feud of Victorian proportions.

But this was a dinner party attended by Immanuel Kant, and the confusion was probably cleared up over a suckling pig and a glass of port.

Turns out the schoolmaster was putting together a natural history collection in Hamburg. At a dinner party meeting the Count for the first time, he had heard Ente (duck) instead of Ant, an anglicism for the German word Tante (aunt).

The League of Ordinary Gentlemen is Born

Every summer my friends and I used to spend a wild weekend of pit-roasting, beach games, body-surfing and bands at one of their parent’s beach house in New Jersey. It would be a weekend of new friendships made in the surf or around the fire pit.

Then we got busy. We got new jobs, new partners and new friends from Burning Man. The regular meet-ups at the beach house ended. We couldn’t let this happen.

So two of us came up with the idea to host a quarterly dinner for 9 of the guys who regularly attended. We were a diverse bunch. Some were tighter as friends than others. But collectively we had enough in common that everyone thought it would be a good idea.

And so the League of Ordinary Gentlemen was born. 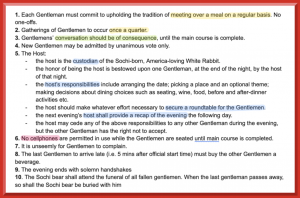 Many of the rules are tongue-in-cheek, but as you can see from the highlights, they are designed to confer gravitas to the occasion, with the goal that everyone makes a special effort to do this four times a year.

Our first dinner was on December 9th, 2014. Over nearly six years we met 22 times, collected 21,471 words across 69 pages in our document of recaps and most importantly, we’re all close friends. This is highly unlikely had it not been for these dinners.

We hosted our 22nd dinner at Peter Luger’s in Brooklyn on March 3rd, 2020, two weeks before we entered the eye of the pandemic storm. We joked about ignoring rule nine in favor of foot taps and elbow bumps. Those were simpler times.

Now, we need more dinner parties if we want to save society.

Why We Need More Dinner Parties

A familiar call to many of us. The sign to gather as a family every night and talk. To find out what everyone did that day, to discuss the news of the day, and to joke and have fun together. 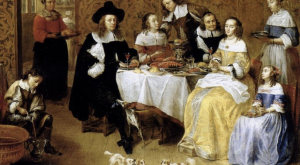 Eating with another person allows for an interchange of ideas. New material flows into the mind, otherwise occupied with the routine task of eating, in a natural way.

Eating a meal takes time. This is intentional time spent in conversation. Time where our attention isn’t being competed for by news alerts, messages and TikTok videos.

Eating a meal is fun. The meal itself is something to be enjoyed, leaving you relaxed and satisfied. This is the perfect state of mind for conversation.

In a world where, through the internet, we are learning just how different other people are to us; where polarization and disagreement are the drivers of discourse, we need more conversation. Conversation allows us to explore nuance. You know this intuitively every time you pick up the phone to call someone when a text message doesn’t allow you to get your point across.

As Immanuel Kant said in Anthropology from a Pragmatic Point of View, “The life that harmonizes best with our humanity is the life that involves, on a regular basis, good meals with good conversation”

So how can we create this kind of life? Well these two guys, Jefferson and Kant, seem to know a thing or two about this. Look how much effort they put into sharing a meal… on a boat. 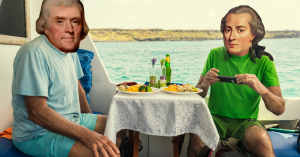 Here’s what we can learn from them.

Preparing For Your Dinner Party

Size and diversity are the key ingredients for creating a vibrant invite list. Kant recommends we follow Chesterfield’s rule: i.e., no fewer than the Graces (three), no more than the Muses (nine). Jefferson suggests eight to fourteen guests, although it was said that when he wanted to have a vigorous conversation at his dinner table between political rivals, he restricted the number of guests to four.

Don’t invite more people than can participate in a single conversation around your particular table. The sweet spot seems to be 4-9. Our League Dinner consists of 9 Gents and this has always worked well. Of course, your particular space may dictate the size of your dinner table. More on the actual table in a bit.

Diversity is crucial – whether it’s ideological, racial, ethnic, gender. Conversation is dry if everyone has the same experience, opinions and beliefs – plus the dinner will lack the creative tension that sparks ideas.

Kant and Jefferson agree that the host should choose a topic of common interest to guests. Kant goes further to suggest that you should give guests the opportunity to add their own topics. He’s not clear if this is ahead of time or on the night.

For our League Dinner we typically announced them ahead of time (both host- and guest-chosen topics) and this tended to build anticipation for the evening.

Jefferson had the interesting quirk of including an artifact on the table as an ice-breaker topic. For instance, a jar of Mississippi mud. He’d ask guests if they’d been and would go on to discuss the area, its people and features.

We had a trophy. In our case it started out as a stuffed bear from the Sochi Winter Olympics (gifted to me by a Russian Airbnb guest), which served two purposes. The host for the evening would bestow the bear on the next host as a way of passing the torch. Each host would also add something to the bear – a button, a flag, an earring, a bag. These artifacts became conversation starters at the next dinner and often symbolized something personal and heartfelt to the new host. This added another way for people to get to know each other.

Get a round table. See Rule 5 in our League Dinner rules. Turns out Jefferson was a proponent of the round table too. Had you been invited to the White House to dine with the President, you would have found a round table with no one at its head and no assigned seats. In his day it was a careful attempt to avoid the parade of rank and hierarchy so typical of the European monarchy. The conversation flows better around a round table too, especially for dinners with more than 6 guests. Of course, round tables are not exactly abundant in homes these days. A rectangular table works for 6 or less, but observe the principle of no one at the head and no assigned seats.

Two other accompaniments to consider:

The Flow of the Dinner Party

As the host, it’s your job to ensure that all participants feel welcome and have a chance to talk. Introduce strangers, invite people by name to offer their opinion on a topic.

Kant offers three helpful stages to think of your dinner party in:

I described Jefferson’s unique conversation starters, but to really get everyone involved, you can build on this with an ordered round of sharing personal stories.

For our dinners, everyone would provide a quick update on business, family, and life in general, sometimes touching on a personal reflection of the question posed ahead of dinner.

This was a great way for everyone to speak and for us all to catch up on what we’d missed since the last dinner. For a dinner where many don’t know each other, you can use this time for introductions. Make it interesting by asking guests to share something people don’t know about them.

Once everyone has had a chance to speak, it’s over to you, the host, and it’s time to dive into the common topics of interest for the group.

There is one rule to rule them all here: you must have a single conversation. Each person talks to the whole table and the whole table listens. That’s a collective brain of 4-14 minds on one topic. That’s pretty powerful.

In our League Dinner rules we banned side conversations and cellphones at the table as specific reminders of the importance of having one single conversation.

Other useful rules to remember, and in no particular order, are:

As our League Dinner winded down, with Gentlemen fired up from impassioned debate, the conversation would relax into banter and joking as if to blow off steam. Side conversations would start. Sports scores would be checked and discussed. An after-dinner drink or dessert would be enjoyed. This is a fun and necessary denouement to an evening of great debate.

After The Dinner Party

Jefferson encouraged guests at the end of dinner to share something they learned or an idea that was inspiring or action they planned to take.

Nate Kadlac, who hosted brunches in LA to get to know the community when he and his wife first moved there suggests asking each person to provide a ‘give/ask.’ What’s one thing they can give; one thing they need?

We included a host responsibility to provide a recap of the evening. Hosts took this seriously, with most of us spending our cab ride home jotting down notes on our phone. As I mentioned earlier we have 21,471 words across 69 pages in our Google Doc of recaps. It’s an anthology of our lives and our views through the 5+ years we dined. I can see how this document will never lose interest for me.

I don’t know when we Ordinary Gentlemen will meet again. Thanks to COVID, many have moved out of NYC. But I know we will, perhaps less frequently. The history we’ve built through our League Dinners is too strong to not continue to write our story.

As Kant argues, “by forcing reason ever inward on itself, it creates pathological conditions of thought and a sort of hypochondria”

As the nine of us Gentlemen know deep down, society needs more discourse. The world needs more dinner parties.

Thank you to Agathe De Mauleon, Nate Kadlac, and Matt Tillotson for the wise edits and invaluable feedback in shaping this piece.

Scroll to Top
0 Shares
Share via
Facebook
Twitter
LinkedIn
Mix
Email
Print
Copy Link
Powered by Social Snap
Copy link
CopyCopied
Powered by Social Snap
We use cookies to ensure that we give you the best experience on our website. If you continue to use this site we will assume that you are happy with it.Accept